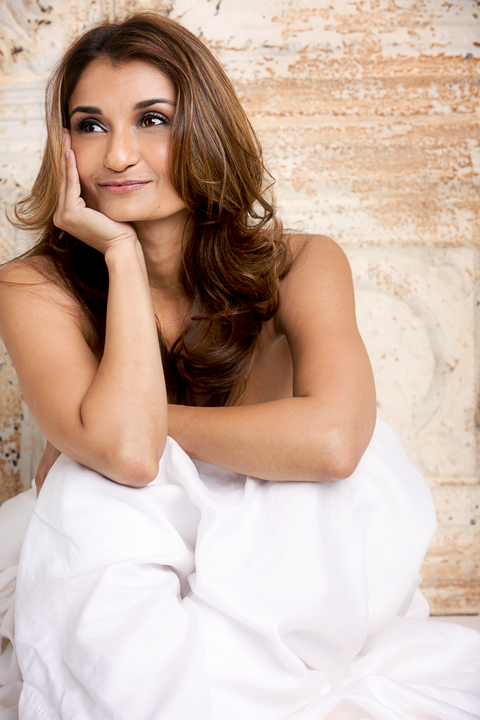 Anjali was born in Cleveland, OH and raised in Orange County, CA, by  Drs. Ela and Bharat Bhimani. After performing in school and community theatre for most of her young life, she went on to earn a degree in theatre from Northwestern University’s highly acclaimed theatre school, with a certificate in musical theatre. After leaving Northwestern, she went on to perform at several regional theatre companies including the Goodman, the Lookingglass Theatre Company, Chicago Shakespeare Theatre, Berkeley Repertory Theatre, and others and to collaborate extensively with director Mary Zimmerman, eventually moving to New York when Mary’s Metamorphoses moved to Second Stage off-Broadway and Circle in the Square on Broadway, earning the play a Tony nomination for Best Play.

Anjali continued performing on Broadway when she joined the cast of Andrew Lloyd Webber’s Bombay Dreams, going on to take over the role of Bollywood diva Rani in the hit musical. Other collaborations include working with Tony Kushner and Maurice Sendak on their production of Comedy on the Bridge/Brundibar, the world premiere of The Existents, starring and with music by Ty Taylor, A Widow of No Importance by Shane Shakrani, and as Safia Das in playwright D. Tucker Smith’s epic adventure romance, Roof of the World, among many more.

Since 2016, Anjali has been known worldwide as the voice of the reality bending hero Symmetra in Blizzard Entertainment’s wildly popular video game Overwatch, along with other gaming heroes and villains such as the unbridled expert modder Rampart in Apex Legends, the bloodthirsty Nisha from Fallout 4: Nuka World, Yasmin Chowdhury in Fallout:76, and Kala in Indivisible. In the gaming community she is also known for her work as the headstrong Mrs. Miriam Landisman on the series Undeadwood and the noble Fy’ra Rai in Exandria Unlimited, produced by Critical Role Studios, and as the hardened sniper Stingray We’re Alive: Frontier by Geek and Sundry.

In 2017, she created the positivity and life-hacking webseries I Am Fun Size on YouTube, a series in which she shares her experiences and interviews other well-known performers in order to help people looking to live fuller, bigger lives. The upcoming companion book, I Am Fun Size, And So Are YOU!, will be available in 2022.

In performance or in life Anjali loves a great adventure, whether on the streets of L.A. or climbing cliffs in Marseilles. She is most proud of her real-life roles as lifelong partner-in-crime to her favorite person, and as the mama of Charley the Wonderdog.